How to remove the Elise rear clam

Have cups or plastic bags and a permanent marker at hand to catalog all the parts removed. Make lots of images and notes!

Remove the engine cover aka bonnet. This requires removing 4 bolts at the hinges, take note of all spacers and rings in the process.

Remove the side inlet grilles, they are fixed with two bolts, slide backwards. They are clamped to the clam at places but they will slide out. Pull the rubber trim away from the clam edge, but leave in situ on the sill edge.

Remove another bolt at the seam with the sill, the other bolt was holding the inlet grille you just took out.

Remove the battery and brackets, disconnect some connectors in that area and slide the loom into the engine compartment.

Remove the carpet in the luggage area.

Remove 4 bolts in the luggage area.

Remove 2 bolts behind the number plate plinth, connecting the lower edge of the silencer heat shield to the plinth. Leave the plinth and the grilles attached to the clam, they will stay connected.

From within the wheel bays, reach into the clam to release a small locknut attached to the roll bar hoop cover ath either end (the part with the 3rd brakelight above the rear window).

Remove the rear roof fixing bracket (soft top/hardtop) from the roll bar. It is secured by one hex cap screw and one dowel.

Cut the rubber seal at an appropriate place otherwise the hoop cover and the b-pillars will remain connected. Some prefer that, i simply cut it to enable seperate storage of the hoop cover.

Release the inertia belts at the b-pillar and the sill end of the seats.

Remove the seats from the cabin.

Remove two bolts below the rol bar in the cabin, which also secure the hoop cover.

Remove the speakers from the bulkhead cover

Remove the harness bar – if present

Remove the plastic cupholder/12V socket between the seats.

Release a bolt fixing the rear clam from within the cabin, this is located approx. 10 cm behind the door lock.

Remove the engine cover hinges all together from within the cabin, make note of its orientation.

Slide the window wash bottle upwards from its support in the clam and support it to something else in the engine bay.

Remove the hex screws around the gas filler cap.

Genly pull the alloy ring, breaking a gasket from the clam, and releasing an o-ring aroung the filler neck. This may be difficult the first time as it may stick.

The filler cap can be put back on.

Prepare a soft landing for the clam, get some help, but not neccessarily.

Slide the clam backwards and make sure it is free all round.

Pull the clam and put it aside.

Make note of the big shims which are placed between the rear clam and the subframe. They must be replaced in the same stacks and orientation later on. Make a lot of notes and pics or secure them with duck tape.

Be amazed by all the road grime which is now reveiled in the engine bay and start making a list of all the mods you can do now! 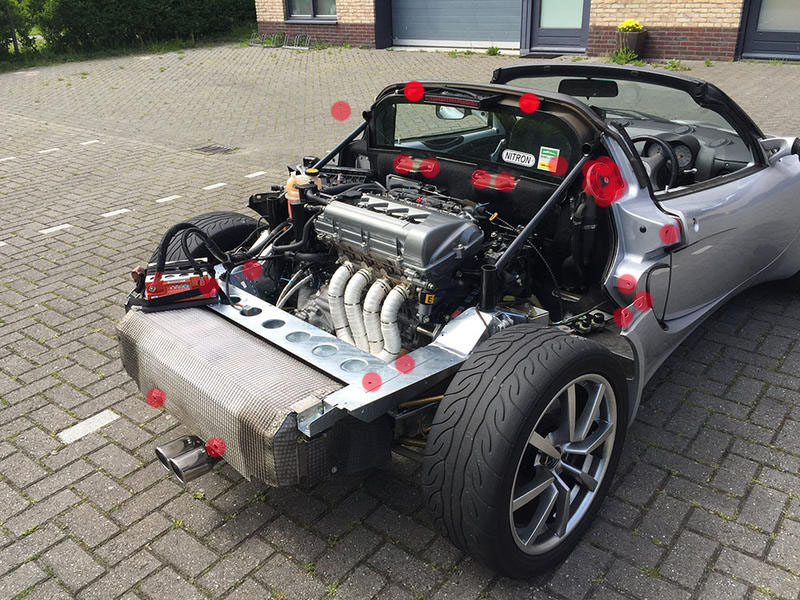 Note: leave the number plate plinth attached to the rear clam, no need to remove that as i did in this picture!