Back in 2015 i removed the entire climate conditioning system from my Elise, this included the airbox with heater matrix, cooler matrix (evaporator) and even the fan. It got replaced by a small race-style axial fan. The a/c pipes and hoses and compressor were discarded as well. The time has come to re-install the lot despite its weight, in favor of more comfort and authenticity of the car.

Unfortunately most refrigeration pipes were lost during the disassembly as most threaded connectors were seized up. In addition the sill pipes are under suspicion as the system never appeared to work properly with the previous owners. The condensor was dust, so in total every part needed replacement so i decided to put that project aside for a few years. But for this upcoming winter project on the Elise i started sourcing replacement parts.

A new heaterbox was sourced from an apparently new car converted into a race car, very happy with this item: 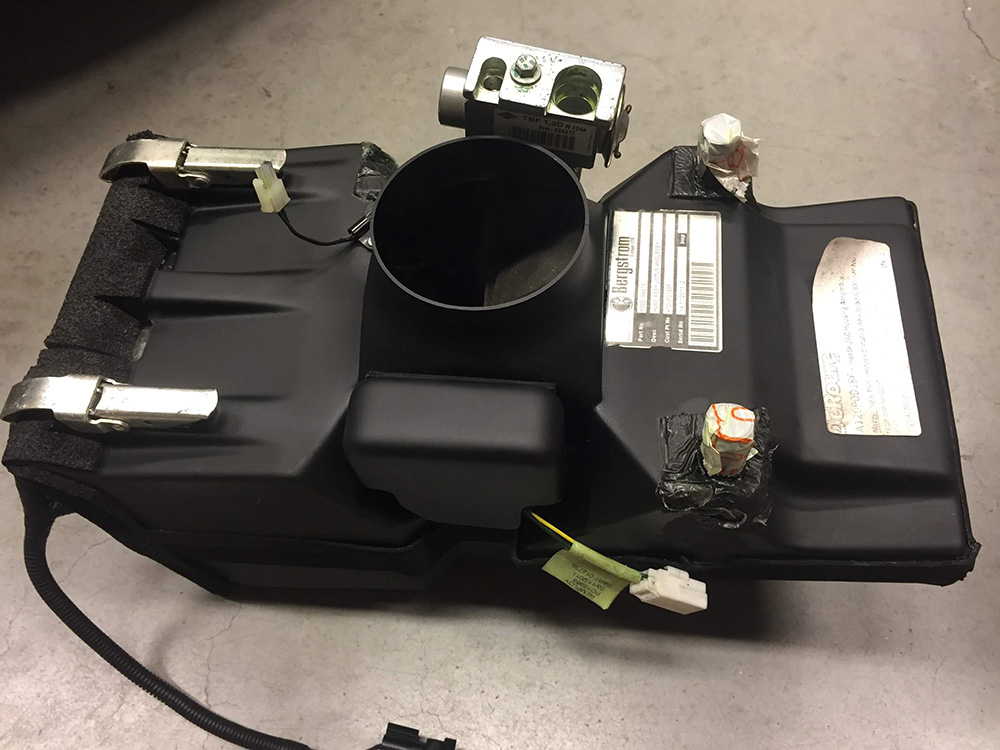 It replaces the old one which i may convert into a plug to take moulds at a later stage. However, there is a difference between a 2zz/1zz setup and a 1ZR/2ZR box. The compressor is of a different type, and as such, the valve differs

I acquired the ‘wrong’ box so will have to re-use my old expansion valve.

These are the old cooler matrix (evaporator) on the left and the heater matrix on the right, positioned the way they are fitted in the box. 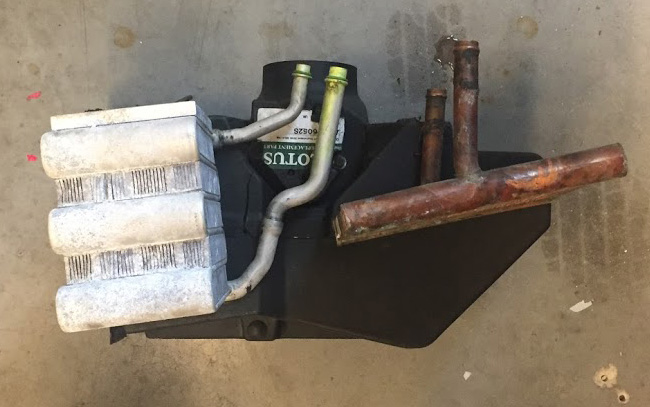 By design the heater is ALWAYS on, but a flap in the outlet (the Lotus sticker covers the servodrive) blocks the flow through the heater to some extent. Not ideal and will be replaced by a regulation of the water feed instead and a fixed flap position. The dash selector will be assigned a new task to achieve that. 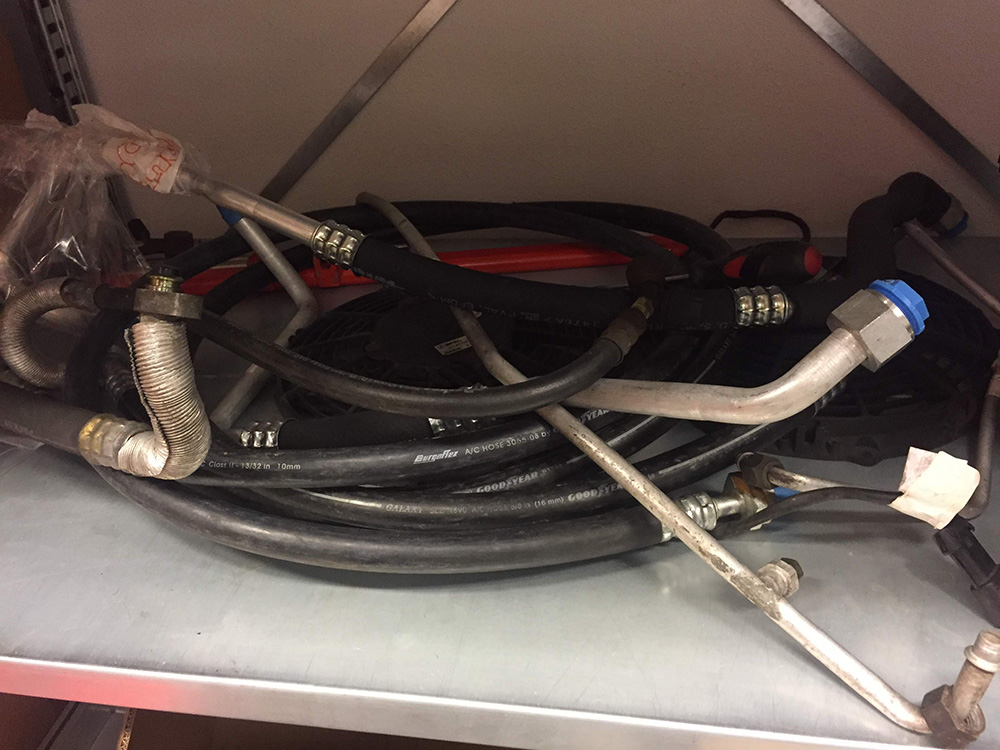 The Elise 111r (and all toyota driven Elises and Exiges) have the fan fitted on the drivers side and the airbox on the passengers side. The refrigerant pipe on my UK-RHD car is rather long as it has to circumphere the brake servo drum. LHD cars have the fan and box rotated, which brings the evaporator closer to the sill connection. As a result both low pressure refrigerant pipes have a substantial different length.

It could be considered to modify the entire system to the new greenhouse friendly R-1234YF refrigerant instead of R-134a gas. Unfortunately that is not immediately possible because the PAG46-8 oil in some re-used parts is not complient with 1234YF gas.

But since most parts are brand new – except for the compressor and evaporator – i plan to flush them and fill the system with ND12 anticipating a future conversion to 1234YF.  Lotus has started building cars with PAGND12 oil as standard and can fill it with both gasses. ND12 oil is also a PAG46 oil, but with additives, it will mix with PAG46-8 oil i expect.

A PAG46-8 filled system cannot be exposed to 1234YF. In addition the service ports are not complient and a refill with 1234YF is still 3 times the cost of 134a, but this will change in time. As off 2017 all new Lotus cars are 1234YF filled so in the future a breaker car could act as donor for new service port hoses  if necessary.

For now i will stick to 134a with ND12 oil and try to create a leak free system to save the environment a bit, 1234YF leakage would have 300 times less effect on greenhouse effect so it has a future.

All seals will be replaced by new HNBR o-rings (usually green, but lotus OEM parts come with black seals, which i will replace).

I have one seized up pipe to replace and a new sealed drier to source but that will happen.

The old original fan was collected from storage and tested ok. But it looks tired so the metal parts will be cleaned and replated again: Cleaned in citric acid and about to be media blasted, ready for the platers; 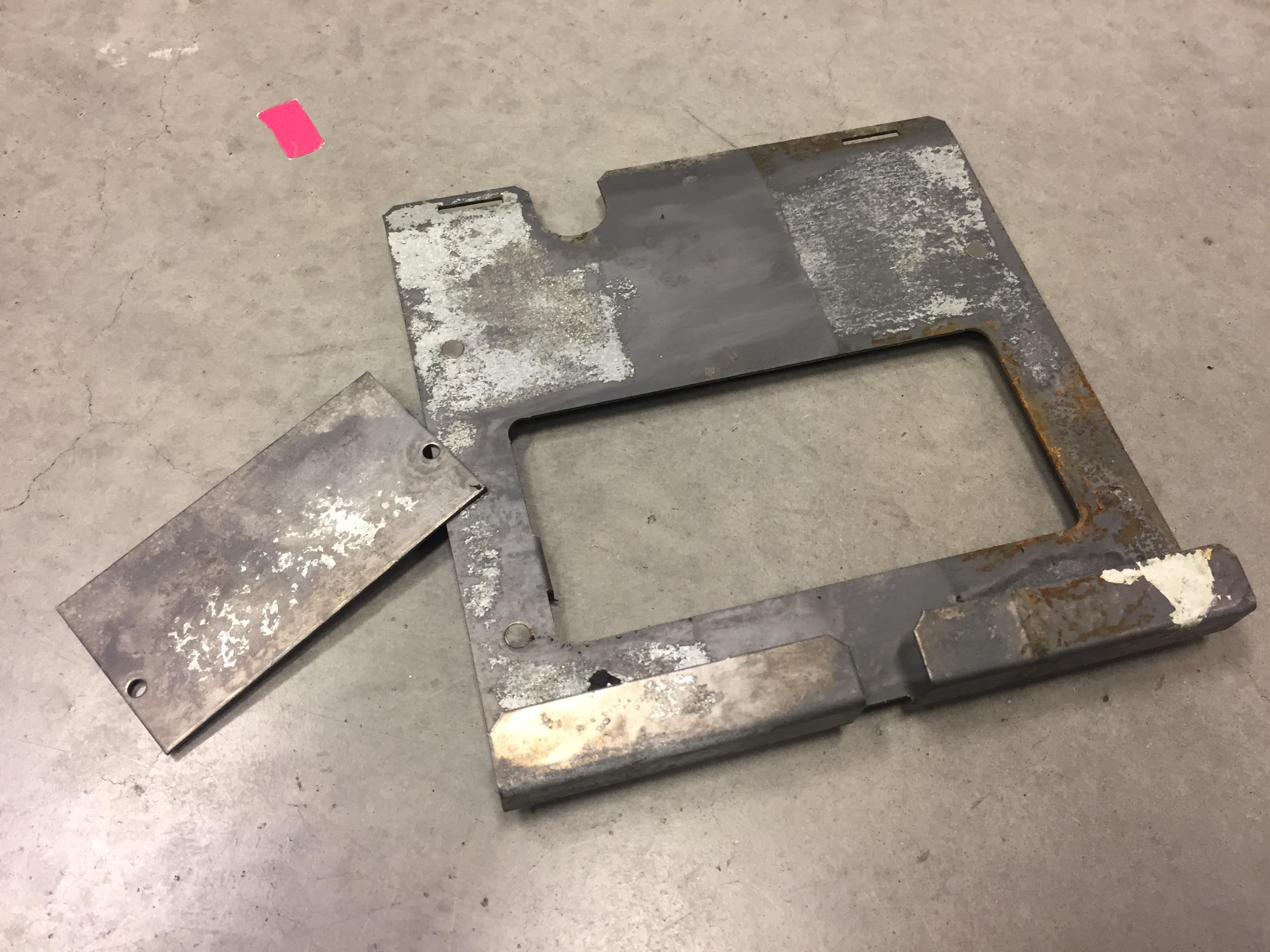 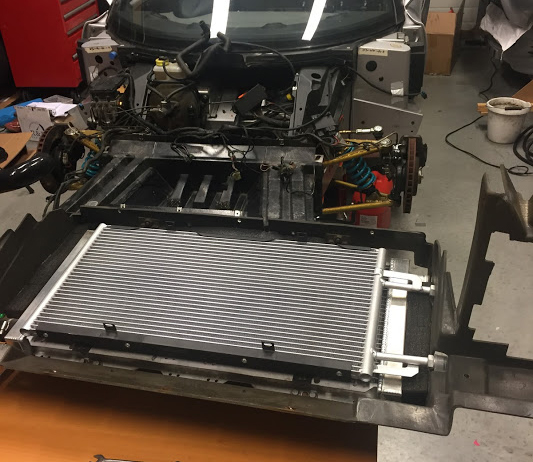 The fan interface is become nice and shiny again, 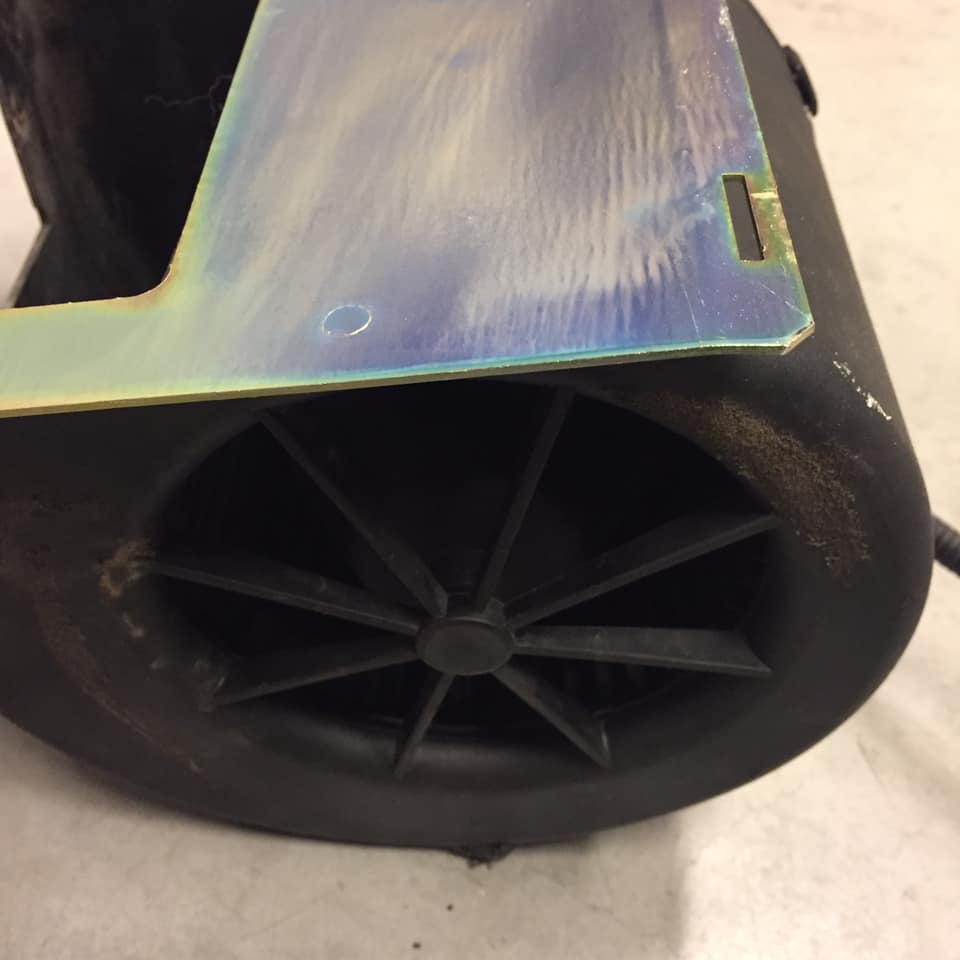 As is the wiper mechanism; 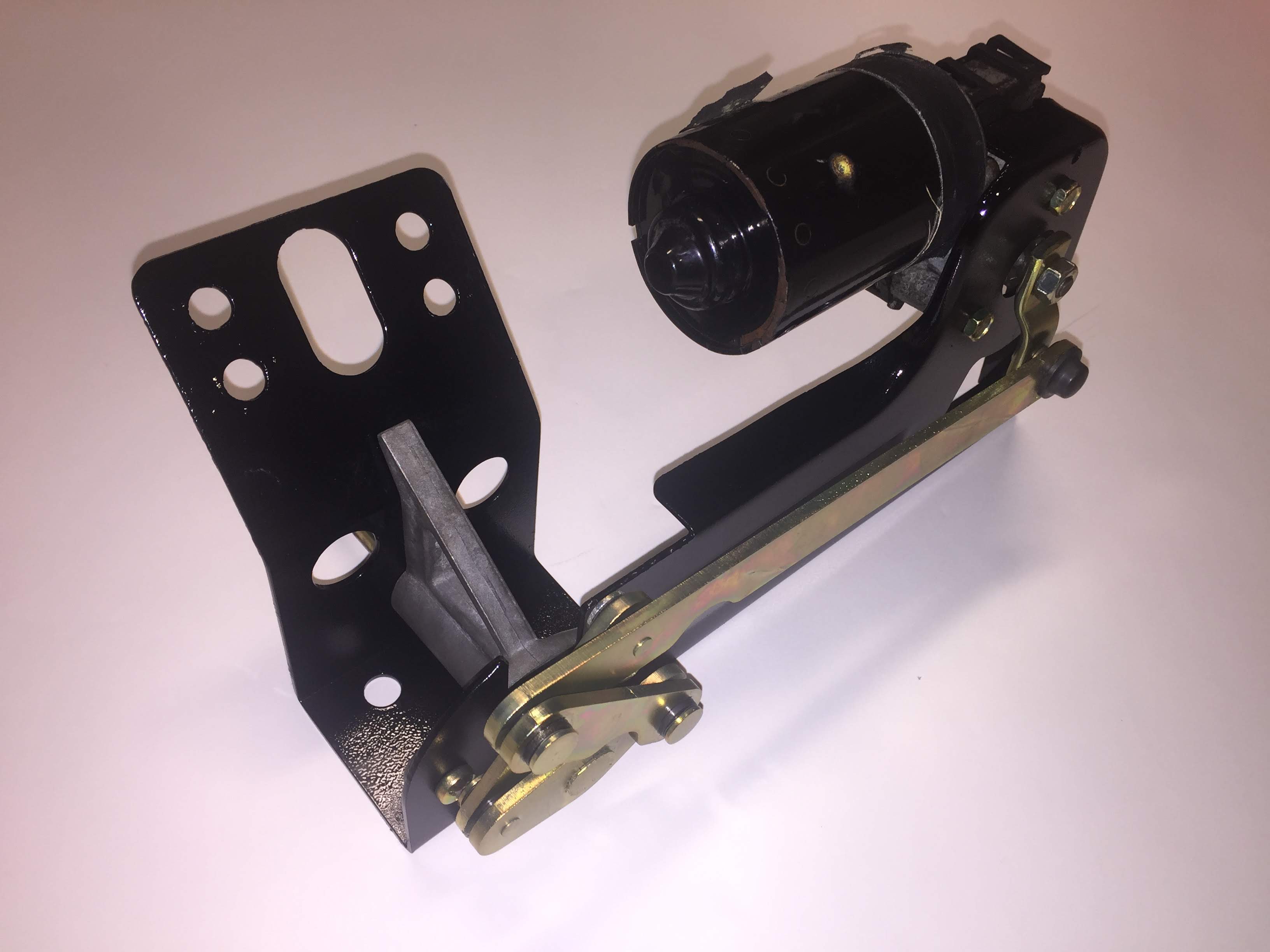 Note (to self), the wiper mechanism can ONLY be removed and replaced with the air distribution plenum released from the bulkhead. However they must be retracted and replaced stacked together simultaneously because of limited space. If the the time comes, you will find out why.

The fan has been re-assembled with a replated face plate 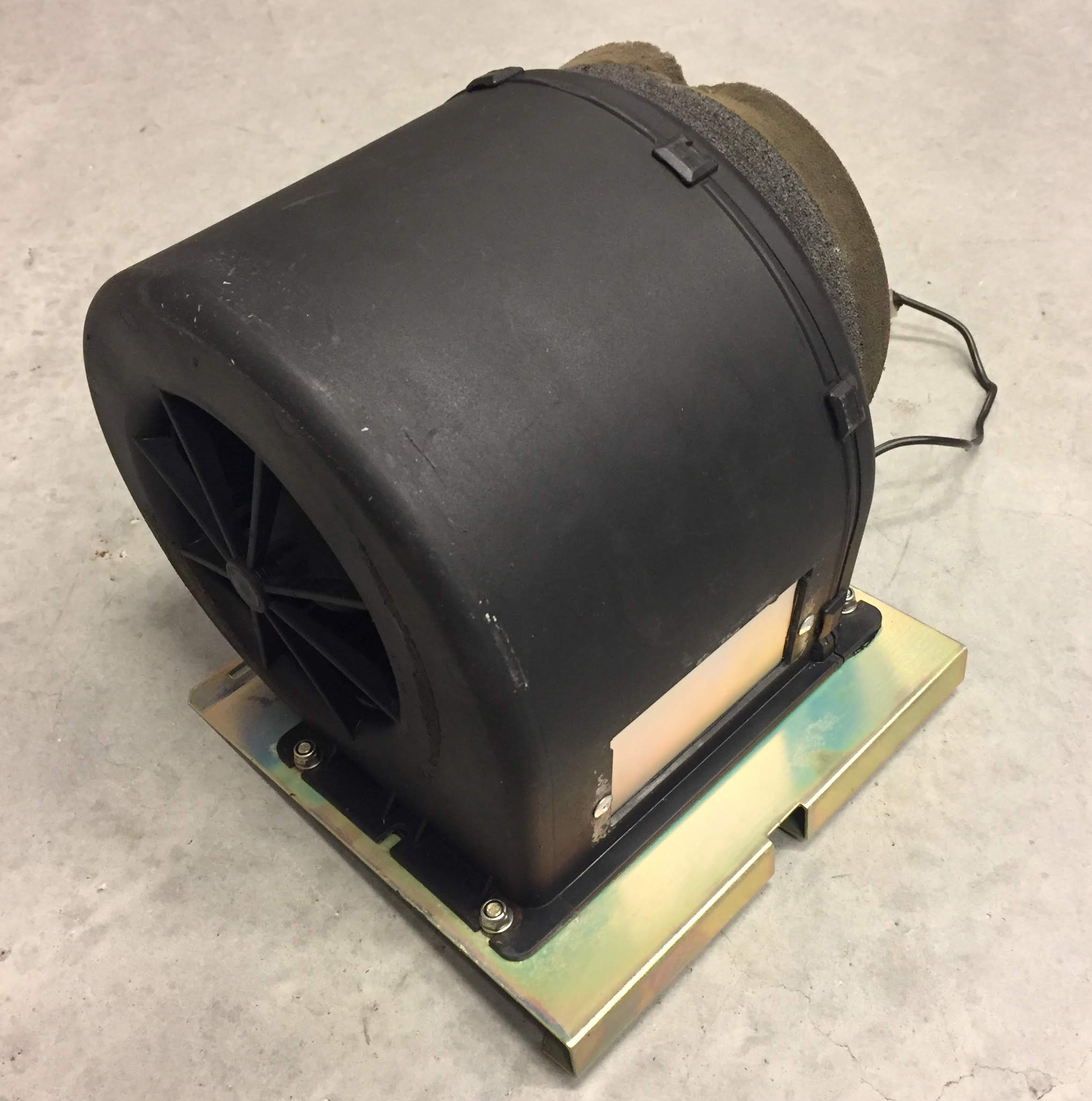 The recirculation flap has been de-rusted and coated. All Tupperware boxes back in the bay after having wiped the bay down with cloth and ACF50 protection. The fan and heater box can only be removed and installed with the clutch hydraulic pipe released on my RHD s2 111r. This may vary for the various types and RHD/LHD builds. The fan slides in and should be left tilted backwards to some extent to give way to the interface plate of the heater box.

The anti freeze sensor has been replaced with the later electronic thermostat kit from Lotus (through deroure part A120P0149S). This kit switches the aircon off in case of freezing up the evaporator. This used to be a capillar probe but has changed over to an electronic switch, fed by the 12volts of the air flap servo. It is actually a drop in replacement with all appropriate connectors. This should improve the reliability of the early s2 aircon system.

The heaterbox is installed by sliding it in outer edge first. This should pivot in the cavity of the chassis rails, and then be lowered to meet the fan interface. (Removal is the opposite). 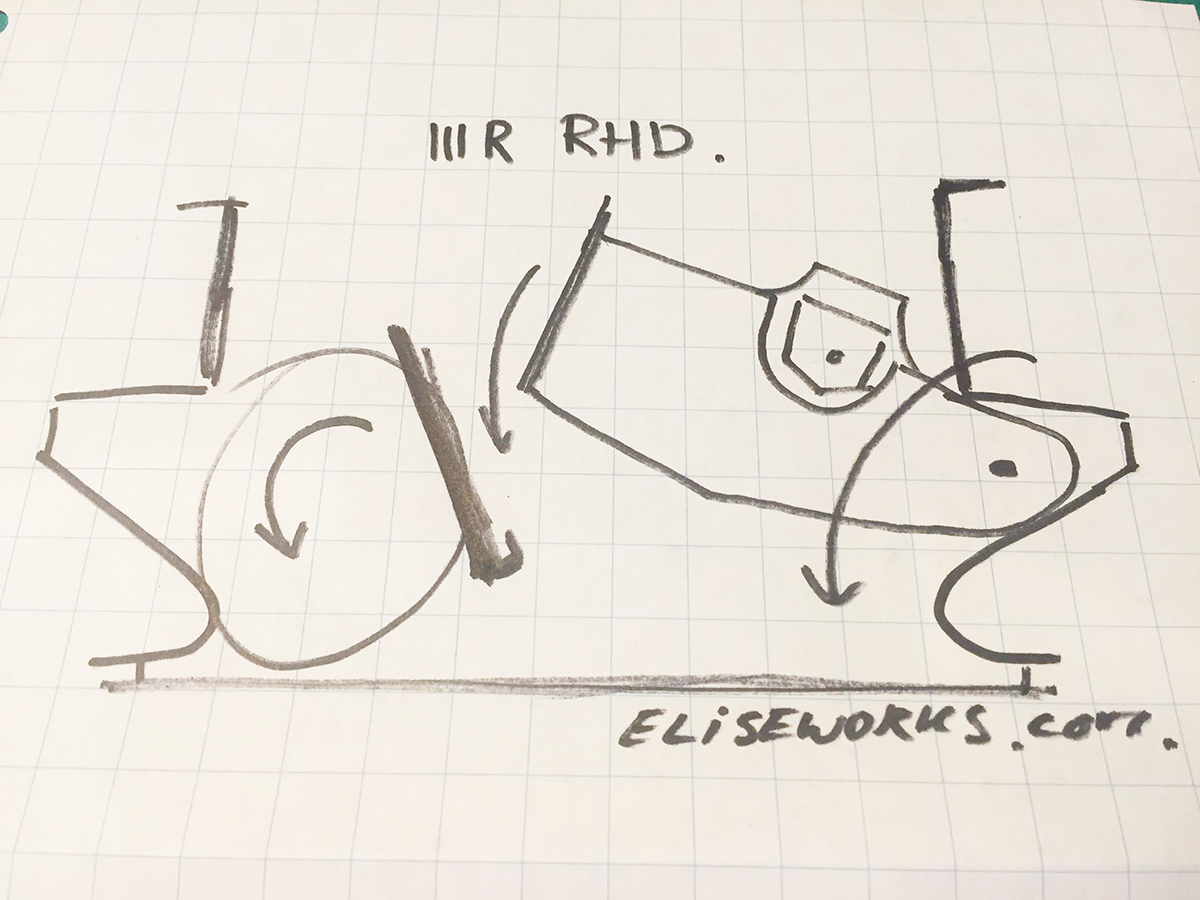 The A/C valve sits on top of the heaterbox but this can be installed and replaced in situ. No need to remove the box. Ford Fiesta by-pass valve sits on top of the heaterbox, adjacent to the dryer receiver. 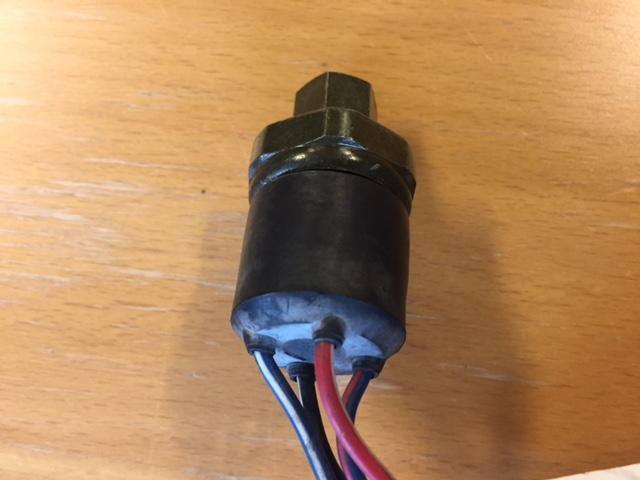 This weekend i finished all A/C lines and purged it to 30 mm Hg vacuum using the coolant tank purge kit. Left it alone for a night and hooked up the vacuum gauge again. All vacuum was still there!

The system has been checked over (purged and nitron pressurized) professionally, and filled with 550g R134a refrigerant, ND12 oil was put in just prior to that. The system is leakfree and now charged. There is some electrical problem which i need to sort as the compressor isn’t activated when engine, fan and aircon are switched on. I traced the fault to either a correded connector of the trinary switch (cleaned them) or a possibly required reset of the ECU by releasing the battery leads for a while. After that the compressor kicks in nicely! Happy times.

The middle value of the trinary switch only switches on the rad/condensor fan after the pressure has increased to 270 psi and then stays on for a about five minutes duration, even if the A/C system is switched off and the engine is way below fan cooling. This is different to the manual which states that the fan(s) are always switched on immediately if the A/C button is pressed. I will have to look into that, combined with my observation that only one fan is driven at 12V instead of 2 fans at 6V each (parallel). I will try a different version of the ECU as well and solve the power to fuse problem at slot 14. [EDIT: note that this issue is resolved, read on for the solution]

How to debug a faulty Lotus Elise Exige A/C system?

Anyway, my A/C worked apart from the unusual fan activation. I mentioned that fuse 14 wasn’t powered by the upstream loom. To test the behavior of the system i diverted the 20A +12V fuse 3 (non existing) drivers window  to the terminal 14 input. Basically a 8 mm2 wire with a 15A fuse and spade AMP connectors on both side to plug temporarily into the fuse box. This would re-instate power on the fan switch box serial fan switch logic. So what happened?

Based on the behavior with only fuse 19 powered (and the manual) i assume the following will happen additionally:

I will confirm these events later. Next is to connect fuse 3 12V in to fuse 14 out in a safe and permanent way which may be reverted in time.

Basically, i have got a properly working A/C now!

I found that the wire to fuse 14 is very thin gauged and probably not up to the job. It enters fuse 14 at est. 1.5 mm^2 gauge and exits the fuse at est. 3.0-6.0 mm^2. Because the feeding wire was burnt some cm’s in front of the fusebox i had no power on the fuse. Fuse number 3 is fed by a sufficient gauge wire and also fused 20A. As i do not have electic windows this fuse is obsolete anyway, and a good source to feed the fan. I tested the fan with a 10A fuse with no problem on high revs, but left it with 15A for peace of mind. 20A isn’t necessary i think as the SPAL fans are rated 8 or 9 amps tops.I capped the abandoned feed wire to fuse 14.

There is servicenote from Lotus concerning the OEM o-ring used on the discharge connection of the compressor for 1234 refrigerant systems on S3 Elises prior to 2019 builds. It is prone to leaking, the size have been changed as this was causing a lot of systems to fail. Seloc Junks may offer aftermarket new capped dryer/receivers – i ordered one and have it stocked. The vessel is few centimeters longer though.

Seloc tip about availability of a new dryer – i do not have experience with these:  https://www.autoairconparts.co.uk/car-air-conditioning-receiver-drier-lotus-elise-1-8-petrol-manual-jan-2000-to-2017-part-31-1043a.html This one is probably a few centimeters longer than OEM as well.

Nerdy tech talk warning….. Do you consider A/C on your FE?
My aircon appears to be at fault over this weekend (luckily prior to the trackday so i can rule that out). So i have to dig into the AC schematics again after having fully rebuilt my 111r aircon. I noticed lotus may have abandoned the awful threaded joints at the sill and the condensor from early model year 20 onwards. They replaced them all with manifolds and clamp plates, just like the expansion valve has always had. That is a great thing as there will be no more cross threading of those joints and it easily gives the opportunity to debug leakages of parts of the system with easy tools.
It concerns the vin codes RHD LH_10071 and LHD LH_10079 onwards, so L(model year 2020) H(Hethel) 1(model) 00##(serial)
I cannot guarantee it will be an improvement on reliability but in case you are in doubt ordering A/C, check with your dealer.
I would give a kidney for the new design.
——-